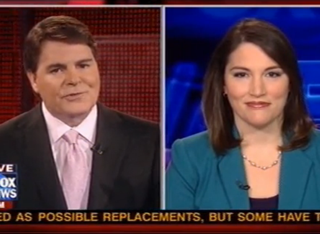 It’s been a very weird political Saturday, that much is true. With Herman Cain taking the media by storm today with his announcement that he will suspend his presidential campaign, many reporters are still trying to figure out what just happened. On Fox News today, Gregg Jarrett was doing just that, asking reporter Shira Toeplitz of Roll Call whether she believed the Cain campaign was “truly an attempt to become President,” and whether providing such a festive atmosphere to his supporters today was borderline “cruel.”

“It’s been a strange day,” Jarrett acknowledged, and a “long, twisted trail” for the Cain train. But the way he quit his race, Jarrett pondered, “invites the question: was this truly an attempt to become president, or simply a campaign that was all about Herman Cain?” Toeplitz replied that only Herman Cain truly knows, and that her guess was that he merely hadn’t thought out the worst case scenario very well. “I’m sure he was thinking several months ago when he announced his campaign: ‘what could go wrong?'”

Calling the speech “one of the more bizarre moments in modern American history,” he noted that the way the speech was presented and the event’s tone of celebration, “only to have him say ‘ha, just kidding, I quit,’ that might be regarded as a bit cruel to some of his hard-working supporters.” He also asked whether the sex scandals were really to blame for the fall of his campaign (Toeflitz suggested Cain’s inability to answer questions about Libya was “the nail in the coffin”) and took a shot at the “strange website Women for Cain… which is supposed to be headed by, of all people, Gloria Cain.”