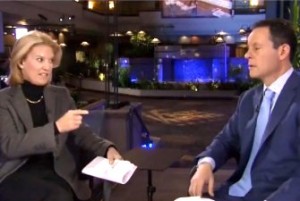 One of the big “Caucus Surprise” stories to drop over the weekend was the revelation that the State Department is withholding 22 emails from its monthly Hillary Clinton dump because they contain information that is now deemed “top secret,” but which were not at the time they were sent. Although the mainstream media has had trouble making this important distinction, there’s one surprising source who wouldn’t bend in her assessment of the legal peril facing the former secretary of state: Fox News’ Greta Van Susteren.

It’s an important distinction because the case being made against Hillary Clinton’s candidacy increasingly centers not on the issue of judgment or trustworthiness, but on the notion that Clinton could face criminal charges and, as Marco Rubio put it, have to “pardon herself” if she’s elected. On Monday morning’s Fox and Friends, co-host Steve Doocy tried several times to get Greta to go along with this bit of reasoning, and although she still called the email issue a “horrible scandal,” Van Susteren would not budge on the possible “legal peril”:

Doocy: Legally, and that’s your department, there’s a lot of peril here, isn’t there?

Van Susteren: Look, I’m a former criminal defense attorney and I always worry, I always think about the worst case scenario, but I will say this, if these 22 e-mails that are now called top secret, if, in fact, they were classified afterwards, later, because the intelligence agency asked for it, I think she probably has a strong legal argument.

…Kilmeade: Could she get herself in additional jeopardy by the way she answers questions by Greta Van Susteren or coming on “Fox & Friends”?

…Doocy: Given the fact that it sounds like she was hacked, not only by Russia and China, and North Korea, and other bad actors, as well, but how would this change in a legal way for her if it is proven that perhaps some American operators, CIA agents, or people like that, actually died because of secrets other governments got from her e-mail device that was wide open?

Van Susteren: All right, well you say “proven.” I mean, I don’t know whether any of that can be proven. but even if it’s proven I don’t see this having legal liability. Obviously there are all sorts of other implications. She was never supposed to have that server in her house. That violates the rules. So, look, you know, at this point one of the biggest problems we have is that we’re all sort of flying blind. we don’t have all the facts. That’s a big problem. This is without a doubt a horrible scandal. A horrible scandal.

Could she be indicted with a fox? Could she be indicted in a box? No matter how fanciful the hypotheticals got, Greta would not be moved. And they got very fanciful. When Doocy says “it sounds like she was hacked,” what he means is that she got the same kinds of phishing emails that everyone gets, and so even though there’s no evidence whatsoever that any of them worked, the media characteristically sexed it up into a horrible security breach.

Whether you think the email issue is a “horrible scandal” or not, Van Susteren’s analysis, which largely concurs with the fine legal mind of our own Dan Abrams, should put the brakes on attempts to overhype this revelation, or the next.