Fox News Guest Cites Black Unemployment to Slam Obama and Praise Reagan, but Guess What He Left Out?

Conservative author Doug Wead sought to unfavorably compare former President Barack Obama with former President Ronald Reagan by saying that while Reagan “changed the world,” no one would want to “go back to Obama, 16% unemployment for African-Americans.” There are a few problems with that.

On Tuesday morning’s edition of Fox & Friends, co-host Steve Doocy interviewed Wead on the subject of some 2020 Democrats’ criticism of Obama at last week’s debates, in contrast to Republicans’ reverence for Reagan.

“Go ahead and compare the way the Republicans have embraced Ronald Reagan through the years, as opposed to how these Democrats have, at least at that particular debate, gone after his legacy?” Doocy asked.

“We like Barack Obama, we elected him, and we felt better about ourselves, and we re-elected him, but we elected Ronald Reagan, he changed the world,” Wead said, citing Reagan’s handling of the Cold War.

“So Ronald Reagan changed the world,” Wead went on to say, adding “No one wants to go back to Obama, 16% unemployment for African Americans, but they like the legacy of Ronald Reagan and turning the world upside down.”

Wead’s argument leaves out a lot of arguably relevant facts, but the one fact that he directly cites is misleading in a couple of ways.

The first is that while the black unemployment rate did peak at 16.8 percent during the Obama administration — in March of 2010 — it declined precipitously for the remainder of his term, finishing at just 7.7 percent in his last month in office.

In related news, black unemployment was at 14.6 percent when Reagan took office, then rose to 21.2 percent by 1983, and was still at 11.8 percent when he left office, according to the Bureau of Labor Statistics. 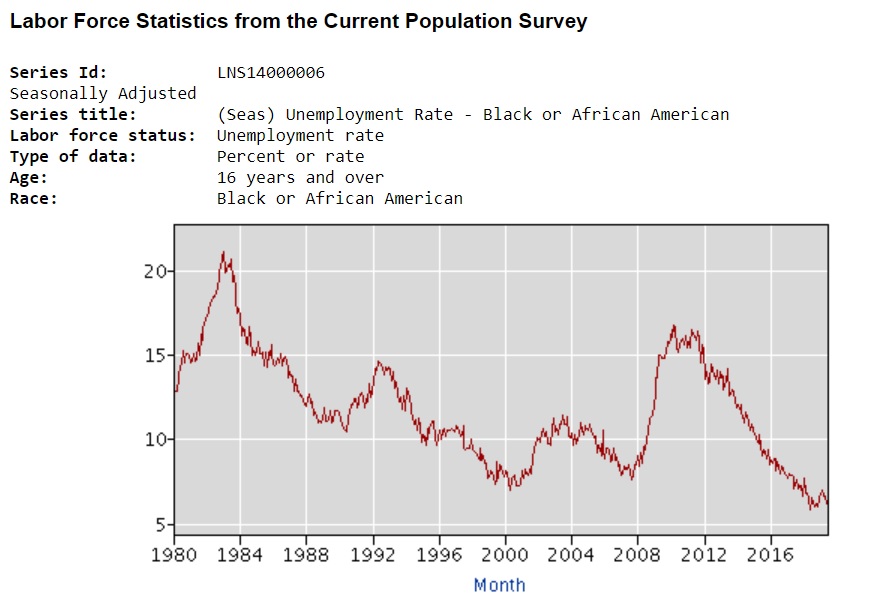 In fact, Reagan presided over the highest black unemployment since the Bureau of Justice Statistics began measuring it, in 1954.

President Donald Trump often touts low black unemployment, but the overwhelming majority of the downward trend — 9.1 points of it — occurred during Obama’s presidency. Black unemployment has decreased by a net of 1.7 percentage points under Trump.