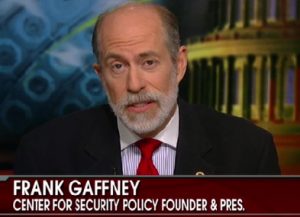 Frank Gaffney, head of the Center for Security Policy, a conservative think tank, appeared on The O’Reilly Factor and told substitute host Eric Bolling he was disappointed with everyone in the media, and yes that includes the Fox News Channel, for underestimating the threat of homegrown jihadists and not being appropriately fearful of the organizers behind the ground zero mosque. Bolling tried to argue Fox commentators passionately opposed allowing the mosque to be built at ground zero, but Gaffney argued Bolling was missing his point: this type of mosque should not be allowed anywhere in America.

Guys like Feisal Abdul Rauf who are prime practitioners of this stealth jihad tend to get a pass or worse yet are sometimes lionized as moderate Muslims who are the opponents of this Jihadism when in fact they are simply prosecuting it by different means. . . . A mosque that is used to promote a seditious program, which is what Sharia is . . . that is not a protected religious practice, that is in fact sedition.

Is Rauf actually a secret jihadist or a peaceful Muslim preaching tolerance? Gaffney certainly believed the former, while many media outlets who previously interviewed Rauf and described the mosque as multi-cultural community center tended to lean towards the latter. The truth might remain a mystery, but as strange as it might be to some, Fox News in the end seems to be somewhere in the middle.