Fox News Host To Sarah Palin: ‘Sounds Like An Endorsement (Of Newt Gingrich) To Me’
video

Fox News Host To Sarah Palin: ‘Sounds Like An Endorsement (Of Newt Gingrich) To Me’ 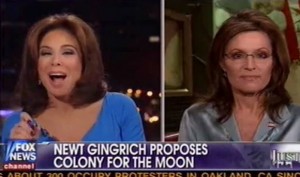 When news broke of Hermain Cain‘s decision to endorse former House Speaker Newt Gingrich, Fox News’ Judge Jeanine Pirro went right to Fox News contributor Sarah Palin for reaction. The former Alaska Governor continued to pump Newt Gingrich’s candidacy up, delivering a passionate argument that Gingrich is the best candidate to take on President Obama. It “sound(ed) like an endorsement” to Judge Jeanine, but according to Palin, it wasn’t. This pattern of Newt Gingrich nondorsements from Palin can only mean one of three things.

Gov. Palin spent a good portion of the segment talking about how frightening Gingrich is to the Republican establishment, and offering a weird defense of his “moon statehood” plank (“I could give you many examples of ridiculous things that our nation has to fund…”), but the really perplexing part came toward the end, when Judge Pirro asked her to assess the Republican field’s chances against President Obama.

She said “Governor, I asked my Twitter followers what they wanted me to ask you. And, I am @judgejeanine: Which candidate has the best chance of beating Obama?”

“Well,” Gov. Palin began, “I would answer, which candidate is most passionate about the sudden and relentless reform that is needed? Which candidate understands that government is not the answer? Not on a state level, say when it comes to mandating what level of health care you must purchase, or on a national level.”

She continued, “I think that comes down to who can articulate their ideas, their solutions, best. And in a campaign, the way you articulate that is in the debate. And, I have appreciated again, Newt Gingrich’s — his style in debates, his thinking, his way of explaining what it is that he stands for, so I think that in a debate, Newt Gingrich would clobber Barack Obama, and that is one step closer to the voters being able to have a tool to make up their minds whether it should be Barack Obama, or the GOP nominee.”

“Sounds like an endorsement to me, Governor,” Pirro said. “Have you just endorsed Newt Gingrich?”

Gov. Palin responded, “I said for many weeks now, I want to continue the process of the vetting…”

Judge Pirro was taken aback. “But you said, the best chance of beating Obama…”

“Because the math is the math, and the math is…” Governor Palin interjected.

Judge Pirro, to her credit, wouldn’t let go, and exposed the fallacy in Gov. Palin’s dismissal. “The math is Obama… the math is Mitt Romney is the strongest against Obama, and Santorum beats Newt in terms of the math.”

Suddenly, it wasn’t the math? “That is at this point, without the vetting process continuing and the debates continuing, which I would like to see.” Palin responded.

Then, it became the math again, I think. “The math is the math, and the math shows us today that Mitt Romney and Newt are very close. Now, if as pundits are telling us, those elites who want the better of us, who want us to just obey them and listen to them, they want to shut…”

Judge Pirro had to cut Gov. Palin off because she was up against a hard break (TV jargon for “guest not making any sense”), and I will leave it to the viewer to decide if Pirro’s toss to commercial was a happy accident, or a subtle shot at Palin: “Should this woman be prevented from seeking public office because her English is so bad? I mean, really bad.”

For the record, Palin’s Newt attitude sounded like an endorsement to me, too, as did her admonition to South Carolina voters to vote for Gingrich. Maybe Palin is like the Wallace Shawn character in The Princess Bride, whom Mandy Patinkin’s Inigo Montoya tells, “You keep using that word. I do not think it means what you think it means.”

In this case, Palin won’t use the word endorsement, but keeps telling people they should vote for Newt Gingrich. She did it in South Carolina, and she’s doing it now, and former First Dude Todd Palin has already “made it official” with Newt. Why won’t Palin admit she’s endorsing Gingrich?

There are three possibilities (not including “to annoy liberals”). The first is that she just really likes the attention (and is desperate for it), and wants to draw out the (limited) suspense as long as possible. Palin’s detractors would probably favor this theory, and point to her presidential hopes, which she teased long after even conservative interest had gone limp, as evidence.

The second, more likely possibility is that Gov. Palin’s official endorsement of Gingrich is already in the pipeline, but is being saved for when it will give him the maximum bump. If that’s the case (and I believe it is), the Gingrich campaign ought to roll Palin out sometime on Monday. If Gingrich loses Florida, there aren’t enough bumps in a Braille Bible to help him.

The final option is the most tantalizing of the bunch, the one for which liberals dare not hope, and whose name the Republican establishment dares not whisper: perhaps Sarah Palin won’t be endorsing anyone, because she’s still leaving open the possibility of an independent run. This sort of dovetails with reason #1, because she could conceivably cause a stir by teasing such a run without ever doing it, but those supporters who felt burned by her summer of head-fakes might require her to actually do something before they believe again.