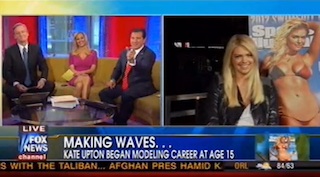 This past week, supermodel Kate Upton has been all over the news, partly because she nabbed the coveted Sports Illustrated Swimsuit Issue cover spot and partly because, Jesus, just look at her. However, did you know that her uncle is a Congressman?

For some, including this writer, this fact only works as further proof that Upton isn’t actually a human but rather a robot designed by the government to be the world’s most beautiful woman and hypnotize regular Americans through the Dougie (the intense amount of Photoshop on that cover isn’t helping disprove the inhuman theory). For the folks at Fox News, though, this meant that they had the chance to interview both Uptons in one morning about the young model’s sexy pictorials.

It was as wonderfully uncomfortable as you can imagine.

First, on Fox and Friends, came Kate. Unfortunately, the young lady is already no stranger to awkward TV interviews (this, so far, takes the cake as worst) and this was no different. Shockingly, it turns out that there just aren’t that many questions that news anchors can come up with to ask the Sports Illustrated Swimsuit cover girl and so a couple tend to get repeated. That appeared to be the case when Eric Bolling asked Upton to “give us a little Dougie.” Through one of the most forced and gritted smiles ever on TV, she responded, saying “This is not the first time I’ve been asked to do this” and that she’d only do a “tiny bit.” She then very pointedly did not even do that.

Can you imagine being having to wake up in the middle of the night so you can put pounds of makeup on and have anchor after anchor on every morning show around the country ask you to dance for them? It’s enough to make a girl wish she’d stayed on page two instead of the cover.

A similar moment came a couple minutes later when she was asked if she was dating someone. “I’ve gotten that question a lot too,” she said before not saying anything else. That’s the thing about beautiful women. Just like politicians, they learn very quickly the best way to not answer questions they just don’t feel like answering. Like “Can I buy you a drink?” “What’s your number?” and “Can you start dancing on my early morning TV show?”

Speaking of politicians, not two hours later, Rep. Fred Upton, “Uncle Fred” to Kate, showed up on Fox News as well to talk about various issues like the Solyndra scandal. However, it wasn’t long before the subject (and the image on the screen) turned to his much more photogenic family member. Upton did his best with the questions but he seemed a little more comfortable talking Congress talk.

That’s weird. What grown man wouldn’t want to go on national television to answer questions about how “beautiful” his 19-year-old niece looks when she’s barely wearing anything? That doesn’t sound like absolute hell at all!

Watch both terrifically uncomfortable interviews from Fox News below: