Fox News: Is Mara Liasson The Next Juan Williams? And Why Isn’t Nina Totenberg Being Scrutinized? 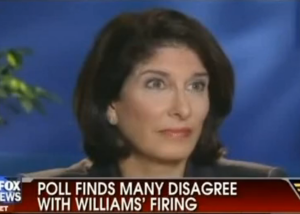 For the second day in a row, Fox News seems to be ignoring the rest of the alphabet in favor of just three letters: N, P, and R. Today, on America Live with Megyn Kelly, correspondent James Rosen brought up a blog post written by Eric Boehlert of Media Matters—one that calls for NPR to take action against Mara Liasson, who is both NPR’s national political correspondent and a regular presence on Fox shows like Special Report with Bret Baier and Fox News Sunday.

Boehlert—writing for what Rosen describes as a “liberal media watchdog group that makes criticism of Fox News a full-time mission”—says that though Liasson has neither “said anything as offensive as Williams” nor has “that kind of track record while appearing on Fox,” she does break NPR’s Code of Ethics by appearing on Fox:

Also, the NPR ethics code, written “to protect the credibility of NPR’s programming by ensuring high standards of honesty, integrity, impartiality and staff conduct,” forbids NPR journalists from participating in appearances that “may appear to endorse the agenda of a group or organization.”

Is there any independent viewer still watching Fox News today who thinks it does not endorse a political agenda? I mean, c’mon.

But according to Rosen, if Mara Liasson is coming under scrutiny, longtime NPR correspondent Nina Totenberg also should. Totenberg appears regularly on Inside Washington, a show that also features Fox News pundit Charles Krauthammer. Totenberg has also made incendiary statements that haven’t incited censure from NPR.

In 1995, for example, she had this to say about the late senator Jesse Helms: “I think he ought to be worried about what’s going on in the good Lord’s mind, because if there’s retributive justice, he’ll get AIDS from a transfusion, or one of his grandchildren will get it.” (To put the remark in context: as the New York Times wrote in Helms’s obituary, the Republican stalwart “fought bitterly against federal financing for AIDS research and treatment, saying the disease resulted from “unnatural” and “disgusting” homosexual behavior.”)

Though it seems like an overreach to say that someone should be fired in 2010 for something that was said fifteen years ago, Rosen may have a point about Totenberg appearing on Inside Washington. Boehlert’s remarks about Liasson, though, are just remarks—there’s no reason to believe that NPR is actually considering axing her.

The clip from America Live can be found below.