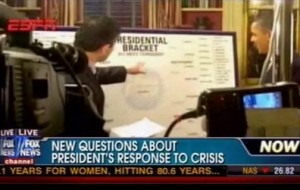 In the not-so-cleverly titled segment “Barack-etology 2011” President Obama appeared on ESPN today to show the nation how he’s filled out his NCAA bracket, predicting which college basketball teams will do well in March Madness. Obama is an admittedly big sports fan, and many will this sort of light and fun activity as a chance for the President to connect with the hundreds of thousands of avid March Madness fans who are his constituents.

But not everyone thinks this is a fun and harmless exercise. There are some who believe that this sort of presidential activity is not only an incredible waste of time, but also demonstrates insensitivity during these dire days in which the country finds itself – what with trouble in the Middle East, labor disputes in the Midwest and a potential nuclear reactor seemingly on the brink of a melt down in Japan, how can the President find time for something as impractical as college basketball? Oh, and turns out a number of on-air personalities at Fox News channel happen to be of this opinion (and they aren’t afraid to share it!)

There is a point to be made about how a president uses his time, but anyone familiar with filling out a bracket knows that it takes all of about five minutes. And yes, he did tape a segment with ESPN’s Andy Katz, but given the intensity of the President’s schedule and the pre-production necessary for such a taping, one should realistically expect that the taping of the five minute segment took about six minutes of Obama’s time, at most.

There are numerous issues on which one can legitimately criticize a sitting U.S. President – but Obama’s taking ten minutes out of his day to fill out and present his brackets to millions of college hoops fans is not one of them. Watch a variety of clips from Fox news edited together to show just how upset some people are with the President and his brackets.