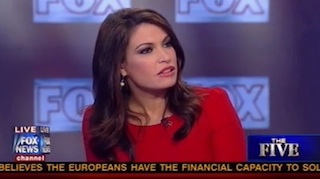 If you’re a regular viewer of The Five, you know that Barack Obama’s chances in 2012 are not good. Despite Bob Beckel’s protestations, every day it feels like we get more proof that he is doomed, doomed, doomed. Solyndra goes all the way to the top! No one can win with these unemployment numbers! Even liberals hate him! That’s why it felt so surprising to hear Kimberly Guilfoyle, with litte fanfare and at such an early date, posit that the President already has re-election in the bag.

The comments came during a segment on the impressive Black Friday figures that was going pretty much just as you’d expect a Five segment on the subject to go. Beckel was excitedly declaring it the beginning of the “Obama Recovery,” Eric Bolling was shutting him down, and Greg Gutfeld was making jokes about liberals being hypocrites since, after all, Occupy Wall Street totally hates Capitalism, right? In the middle of all this, Gutfeld cut in to ask Guilfoyle about comments she’d made during the day predicting that Obama would win next year. While she didn’t seem thrilled that he put her on the spot, she made no attempt to sugar coat her theory.

“Do I [think Obama will win]? I think he does. I said it before the show and you’ve called me out on it. Nice. I think he’s gonna get re-elected at this point.”

“Come on, The Five. I know the good money’s on Mitt Romney’s the presumptive candidate and you guys aren’t fans, but are you really throwing the towel in already? I’m kind of feeling like what Bill Clinton said in [Nicholas] Kristof’s article in the New York Times, saying that, ‘Look, Republicans can’t get it together.’ They can’t even get it together for the primaries, decide who they want.”

Of course, a full year of a daily show where Bob Beckel cackles in glee as his co-hosts fall further and further into depression and despair might make for some compelling television. I mean, not good television. But definitely compelling.

Watch the clip from Fox News below. Guilfoyle’s comments come at the four minute mark: