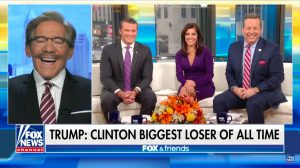 While they may no longer hold political office, former President Bill Clinton and former Secretary of State Hillary Clinton are still a hot topic at Fox News.

The network announced a new documentary series on Tuesday, called Scandalous. The show’s first seven episodes will feature the events that resulted in the former president’s impeachment in 1998.

Part one will begin Jan. 21, and it will air for seven weeks in the 8 p.m. time slot. Actor Bruce McGill will narrate the hourlong episodes for the docu-series.

“Beginning with the failed 1980s Whitewater land deal in the Ozark mountains of Arkansas, and ending with the final determination made by prosecutor Robert Ray on the president’s last day in office, the series will revisit the daily twists and turns of the investigation exactly 20 years after Monica Lewinsky was revealed and first captivated the world,” Fox News Channel said in their announcement.

Scandalous will open with the Clinton saga, but other events are set to get a similar treatment.