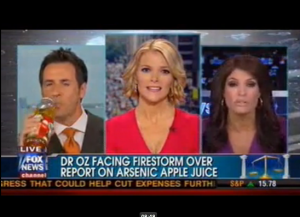 Is it appropriate to make a cheap joke in a televised discussion on critical consumer health and safety issues? Attorney Mark Eiglarsh seemed to think so when he went on America Live to discuss Dr. Oz‘s recent controversial findings that showed various apple juices contained higher levels of arsenic than the safe drinking water limit as determined by the EPA.

Megyn Kelly put together a legal panel to act out a potential Dr. Oz litigation scenario with Eiglarsh and Kimberly Guilfoyle and asked whether Oz was setting himself up for a lawsuit from the juice industry. Guilfoyle argued that the findings ran counter to what the FDA found when testing the same apple juice samples, which were below the results reported by the Dr. Oz Show. “The fact that he did his testing in a irresponsible and unreliable fashion is what I take issue with…The FDA went and tested the same lot that Dr. Oz did and found that it did not exceed their regulations or their limits and also tested other products in terms of quality control…He put misleading and false information out there.”

Eiglarsh was put on the program to represent the defense, countering Guilfoyle, and made it clear, he wasn’t arguing Dr. Oz’s case from a consumer/environmental law point-of-view but from a purely constitutional one. Dr. Manny Alvarez was brought in as a witness in the scenario, as he had published an eloquent defense of Dr. Oz’s findings and found much validity with what he reported.

“He’s telling you that the total concentration is elevated so this goes to the point about food safety and I think that this is the message of the story,” Alvarez thoughtfully noted. “Food safety in America is relatively broken, whether it’s E. coli, salmonella, now we see these trace elements which are very problematic. We also see a lot of unexplained diseases like autism, cognative disease in children. A lot of the apple juice is being brought in from China, what are the checks and balances there? We just don’t know” Guilfoyle then argued that Dr. Oz didn’t use the FDA-approved testing and thus his findings were flawed.

What had been a respectful, even-handed debate took a turn for the absurd when Eiglarsh began chugging a pint of apple juice on the air. Some might have seen this as a boorish act, disrespectful of Alvarez’s well reasoned points, as well as the many people who are concerned for their children’s safety. Others might have found it to be a lighthearted gag. “I’m defending the constitution, he can say what he wants, I’m drinking apple juice!” Eiglarsh sneered.

While Kelly and Eiglarsh laughed at Eiglarsh’s frat-like behavior, parents who trust Dr. Oz and pride on preventing their kids from consuming foods that may be potentially harmful deserve civil commentators who don’t lower the public discourse the way Eiglarsh did.