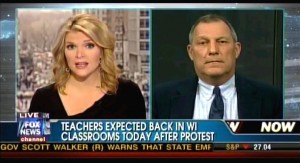 America Live host Megyn Kelly took a look at the ongoing union protests in Wisconsin, paying special attention to the fact that doctors have been writing notes – on camera, no less – to excuse demonstrating teachers from having to work, despite the fact that some weren’t ill.

To get to the bottom of the matter, Kelly spoke with Mike Langyel, the president of the Milwaukee Wisconsin Teachers Union. She began the interview by asking Langyel whether he condoned union members lying about their health issues so that they could take days off without losing their jobs, to which he responded, multiple times, by talking instead about Wisconsin governor Scott Walker.

Kelly attempted to get a straight answer out of Langyel, telling him that while many viewers are sympathetic towards the plight of Wisconsin’s teachers, they’re less inclined to be sympathetic to acts of fraud and pleading with him to step away from his “vanilla, sort of plain Jane talking points” and simply answer her question directly.

Referring to the video of a doctor writing notes for a perfectly healthy teacher, Langyel told Kelly that “whatever happened there, I didn’t see it. I don’t know what it is” before informing Kelly that her question was the “wrong one” to be asking. And that’s precisely the point when Kelly told Langyel how, exactly, television news works:

For better or for worse, I’m the anchor and you’re the guest. So I’ll come up with the questions and you can answer them or not.

Watch the segment from yourselves, via Fox News: