Fox News: Petraeus Will Testify That He Knew Benghazi Attacks Were Acts Of Terror
Video

Fox News: Petraeus Will Testify That He Knew Benghazi Attacks Were Acts Of Terror 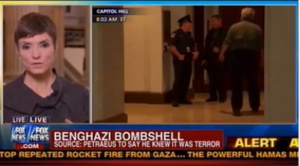 As General David Petraeus offers his testimony behind closed doors today, several media outlets are attempting to offer a picture of what information he’ll offer. Fox News’ Catherine Herridge reported this morning that a source close to the General said the expectation is that Petraeus “will tell the House Intelligence Committee and the Senate Intelligence Committee that he too believed it was terrorism within the first 24 hours and a terrorist attack by Al-Qaeda and this group, Ansar Al-Shariah.”

The committees will be shown composite video of that night’s events, which sources say show that this was not the result of a demonstration.

In addition, a source adds that there’s an expectation that Petraeus will present talking points prepared by the CIA, although Petraeus apparently does not know who authored the final version of these talking points, who provided them to Susan Rice, nor “did he understand that those talking points would form the basis of her controversial statements on the Sunday talk shows on Sunday the 16th,” where Rice linked the attacks to an anti-Islam movie.

Herridge also shared that General Petraeus will today say that he believed the attacks on Beghazi to have been terrorism within those first 24 hours. However, in a briefing three days after the attack, the director put the emphasis on this anti-Islam video. “So we’re going to have to let that play out today,” she said, “and see whether these two different points of view are able to be reconciled in some way in that testimony.”