Fox News Online Guest: ‘Trayvon Martin Would Be Alive Today If He Didn’t Have Street Attitude’ 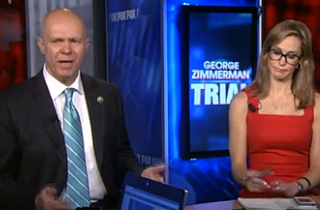 Houck was part of a FoxNews.com live panel discussion about George Zimmerman’s ongoing trial for the alleged second-degree murder of Martin. After co-panelist Tamara Holder (a criminal defense attorney) pointed out that the state’s prosecution will likely point out how Martin was only carrying a bag of candy and a can of iced tea at the time of his death, Houck responded that regardless of whether the selected jury is “impartial,” the seed will already have been planted that Martin was an innocent, unarmed teenager:

“She was talking about the Skittles that he had, and the Coca-Cola that Trayvon Martin had. That doesn’t look good for the defense because he’s injecting something into their minds, like, this is a little kid with candy walking around the street. Listen, Trayvon Martin would be alive today if he didn’t have a street attitude. That’s the bottom line.”

Holder immediately stepped in to say “‘street attitude’ is a very broad thing and is something that actually can be used as a — and I’m not saying this to you, personally — but something that can be used as something racist, like calling a kid a thug.” She pointed out that she herself experienced backlash for using the word “thug” while involved in Chicago legal cases.

Following a programming break, RawStory reports, Houck later addressed his potentially controversial comments, telling host Uma Pemmaraju that “I think people who use the word ‘thug’ or believe that the word ‘thug’ is a racist [word] is racist themselves. You know, because I call somebody a thug, I’m a racist? No. I don’t think so. I mean, that’s crazy.”

Watch below, via FoxNews.com LIVE: