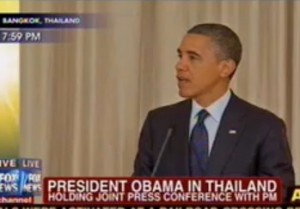 On Sunday morning, President Obama held a joint news conference with Thailand Prime Minister Yingluck Shinawatra, at which both heads of state answered the familiar pattern of two questions each from the U.S. media and the local press. MSNBC and CNN each carried the opening remarks from President Obama and the Prime Minister, but they each dipped out of the coverage only part of the way through the questions and answers. Only Fox News stuck around to hear the President address the violence in Gaza that has been brought on by intense missile attacks on Israel.

At 7:20 on a Saturday morning, there really is no excuse for an alleged news network to abandon coverage of a presidential news conference, but especially a foreign joint presser. Any news producer worth his salt knows that these events follow a very specific patter: the first question is always an on-topic one from the local foreign press, the second one is always a mostly-on-topic question from the White House press corps, the third one is another on-topic question from the local foreign press, and the fourth one is always the money shot, the topical question from the White House press that begins with some variation of “I know we’re here to talk about xyz, but…”

It’s always the only question that has any real shot at making news, yet MSNBC and CNN cut away to air, respectively, Your Business and Dr. Sanjay Gupta, MD.

Fox News, however, abandoned Fox and Friends Sunday in order to carry the entire press conference, and Bloomberg News‘ Margaret Talev asking the President a question about Gaza, and a weird query about whether the fiscal cliff negotiation makes China’s government look attractive by comparison.

The President was quick to stress the cause of the violence in Gaza, “an ever escalating number of missiles that were landing, not just in Israeli territory, but in areas that are populated, and there’s no country on Earth that would tolerate missiles raining down on its citizens from outside its borders.”

The President went on to say that “we are actively working with all the parties in the region to see if we can end those missiles being fired without further escalation of violence in the region,and that “we’re going to have to see what kind of progress we can make in the next 24, 36, 48 hours.”

The President also rejected the notion that the Arab Spring is to blame for the violence, noting that “the exact same situation arose just a couple of years ago, before the Arab Spring.”

Say what you will about Fox News, a press conference like this is the reason that 24 hour news channels exist, and the other networks’ decision to cut away from it was not just poor judgment, it was poor journalism.

Here’s President Obama’s response to the final question of the press conference, via Fox News: