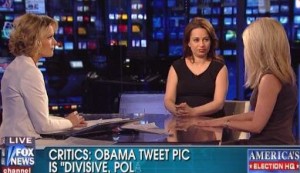 You learn a lot when you follow political news. For instance, yesterday after President Obama revealed a new campaign slogan, conservative pundits helpfully informed us that “forward” was secretly Joseph Stalin favorite direction to walk in! So, when Fox News’ Megyn Kelly promised a segment on tweet from the President that was “raising some eyebrows,” I naturally assumed we were going to find out that it was full of secret evil messages. However, weirdly enough, the message that the ensuing panel complained about was that President Obama wants the country to be united. 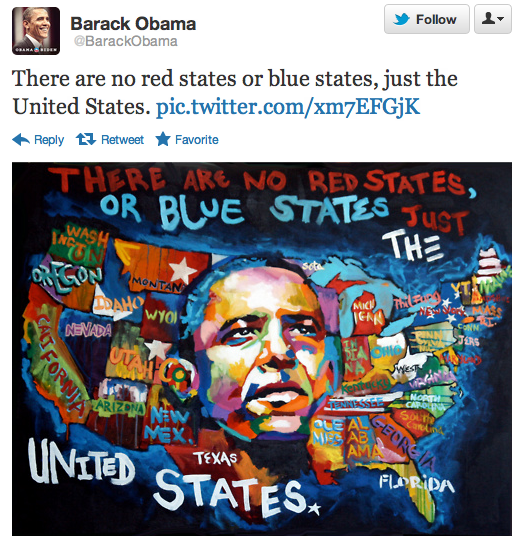 You’ll forgive me for thinking that, if we were going to dedicate an entire segment to the raised eyebrows that this tweet was receiving, the tweet would have something going on in it. Maybe there was a secret sickle and hammer hidden in painting Obama’s hair. Or maybe if you put all the blue letters together they’d spell an anagram for “MURDER ALL THE BANKERS” or “TRAYVON MARTIN IS MY KENYAN SON” or “PAUL IS DEAD” or something. But no. The tweet was just what it was. So what was the problem?

Well, it took me a while to figure it out. We were never told who exactly was “raising [their] eyebrows” to the tweet and the whole first minute of the segment was all about how “uplifting” it was when Obama said that exact “red state/blue state” comment back in 2004. But, finally, Kelly explained:

“I mean, the point in the introduction was, does the new tweet by the re-election campaign, trying to get back to that message, you know, is it a day late and a dollar short? Do the American public — are they likely to believe that now?”

Oh. So the problem is that the tweet is claiming that President Obama is a uniter but his record might not show that to be the case. I guess that’s fair complaint.

…however, the chyron on the bottom of the screen proudly screams, “CRITICS: OBAMA TWEET IS “DIVISIVE, POLARIZING.” So who are these critics and what on earth does that mean? How can you be “divisive” by saying that you want to be the opposite of that? Is it only “polarizing” because some people disagree with it? If that’s the case, wouldn’t that make literally any sentence either candidate ever says also divisive and polarizing?

Anyway, I was going to give up on the segment due to its disturbing lack of secret Communist messages but I’m glad I didn’t or I would have missed this wonderful moment which I believe to be the most self-aware few seconds I’ve seen in the more than two years I’ve spent covering cable news:

JULIE ROGINSKY: Every president goes out there and says [they’re going to unite the country] because that’s what the country purportedly wants. Then they get into reality, and they see the opposing party trying to draw distinctions-

KELLY: It’s a good point. Is it possible? Is it possible in 2012 to put a man or woman in the Oval Office and actually have them be a uniter?

JULIE ROGINSKY: I don’t think so because I think this country, unfortunately, is so polarized and it’s sopoliticized. We live in a 24-hour media culture where you constantly have people like Monica [Crowley] and I going on TV trying to draw distinctions too.

Shockingly enough, after that moment of existential clarity, no one on the panel stood up, left the studio, and went for a walk in the park to think about things. Instead they just kept talking.

However, 20 minutes later on the same show, there was yet another segment about Obama’s sinister “Forward” slogan. So I guess that’s fun too.