Fox News Panel: In Booker Case, ‘Chris Matthews Was The Disciplinarian Of The Democratic Party’ 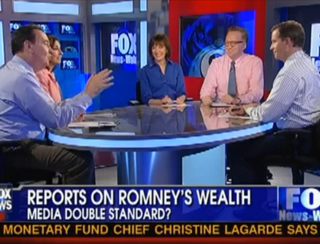 The attacks on Mitt Romney over his time at Bain Capital and his vast wealth have been paramount in the news this week, and on Fox News Watch today, the panel began the debate with Newark Mayor Cory Booker‘s comments last Sunday that the Obama campaign’s fixation on Bain was “nauseating,” and the subsequent “hostage tape” he made qualifying his remarks. While the entire situation was strange to most panelists, Judith Miller pointed out that the most bizarre thing for her was Chris Matthews‘ reaction, which made him the Party’s “disciplinarian.”

Miller laughed at the apology video, noting that the media had nicknamed it a “hostage video,” and turned to the comments in the media in reaction to that. “I just found it so bizarre that the person who chastised him was a member of the media,” she noted, adding that, apparently, “Chris Matthews waas the disciplinarian of the Democratic Party” for being the one to call his comments “sabotage.” While it hurt Booker with the Party, Miller thought that, “to independents, it was music to our ears.” Cal Thomas coined his own version of the opposite of Politifact’s “Pinocchio” ratings and gave Booker “three Diogenes’ Lamps” for telling the truth, praising him for “cut[ting] through all of the media hype and the spin,” which is “incredibly refreshing.”

The panel then turned to the question of whether criticizing President Obama for his relationship to Rev. Jeremiah Wright and, conversely, Romney’s time at Bain. Miller seemed to believe both were fair game, and Ellen Ratner added that the media went far less hard on John Kerry for his wealth; Thomas making the same point about Warren Buffett and arguing that “it’s about what position you take, not how much money you have.”