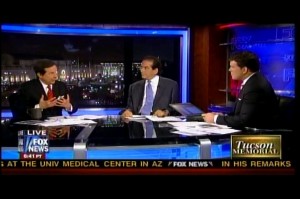 The first impressions in light of President Obama’s speech at tonight’s memorial for the victims of the Arizona shooting, and, at least on Fox News, the reviews are overwhelming positive. Charles Krauthammer, Chris Wallace, and Brit Hume seemed a bit uncomfortable with all the hootin’ and hollerin’, but all seemed blown away by the President’s words.

For Hume, the President’s greatest achievement during the speech was rolling with the punches– “the audience was really in control of this event,” he noted, but President Obama “went with it.” “He behaved as some of his partisans have not, with considerable dignity and grace,” he beamed, despite noting, once again, that “the mood in that auditorium suggested that the sense of mournfulness that you might’ve expected and sobriety that you mightve expected was not there.” Wallace agreed that it was “a little bit more of a pep rally than expected,” though seconded the positive reaction to President Obama, and also commented on the words of Daniel Hernandez, highlighting the fact that he spoke without notes and that his humility was exemplary.

Overall, the panel was pleased, though skeptical that the tone would be a permanent positive change. “After Oklahoma City,” Wallace offered, “I don’t think any permanent lessons are learned in this country.”

The panel’s discussion via Fox News below: