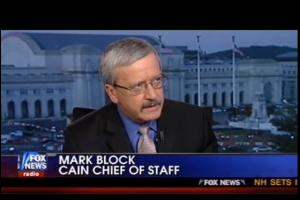 Mark Block, the chief of staff for Herman Cain‘s campaign, appeared on Fox New Wednesday evening to drop a pretty serious whammy of an allegation: Cain’s campaign, it would appear, believes Rick Perry and his campaign people have been “stirring up” the sexual harassment accusations against Cain that have recently come under the media spotlight, kicking off with an anonymously-sourced report in Politico.

As evidence, Block points to Curt Anderson, a man formerly hired by Cain as a general consultant during his 2004 Georgia state senate run. Cain, says Block, divulged details of the claims against him to Anderson so that his campaign “would be prepared if the issue surfaced.” Two weeks ago, Block continued, Anderson went to work for Perry’s campaign. And “what else happened about two weeks ago?,” he asked. “Politico began this smear campaign, citing anonymous sources claiming Mr. Cain acted inappropriately.”

In addition, Block maintains that, while Cain had knowledge of the claims against him (a point which had not been made clear by Cain in his various television appearances this week), he is innocent of the accusations waged against him.

Perry’s campaign, for their part, deny all involvement, as does Anderson, who referred to Cain as “a gentleman.”

Bret Baier brought on a panel to discuss what this now means for both Cain and Perry’s campaigns. The Weekly Standard‘s Fred Barnes, for one, believes Block is going way off-message by accusing the Perry campaign of impropriety, and believes this will do more to harm Cain’s image than Perry’s. Candidates, he added, should not be a part of political “tactics,” and should focus instead on keeping the discussion on their respective messages.

NPR’s Mara Liasson pointed to a similar example from the past, noting that John McCain’s presidential campaign was not impacted by accusations that he’d been involved in some sort of unpleasant and inappropriate “something.”

Charlies Krauthammer highlighted the reality that Cain is essentially shooting himself in the foot here by revealing that he had lied to media outlets about not having known about the allegations against him and the settlements (and/or agreements) made as a result.