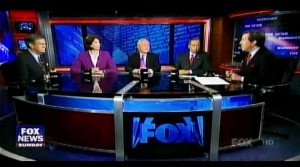 Pastor Terry Jones, disputes any claim that he is responsible for prompting Muslim protesters to kill eleven people in Afghanistan this week. Yet even those who aren’t blaming him for the deaths still have no sympathy for him, since as Bill Kristol eloquently describes Jones, he’s a “total jackass.”

Chris Wallace asked his panel about the situation and Brit Hume succinctly summarized the largest concern, “that these people could become so enflamed by an event so trivial and so minor is very, very distressing.” Yet Mara Liasson claimed that today with the Internet nothing seems trivial anymore. Liasson argued “on the Internet, it seems like there’s some major American religious leader burning a Koran.” And Juan Williams concluded Jones’ little demonstration hurts world peace and hurts the American government.

Even if the media doesn’t cover Jones and doesn’t grant him the publicity he desperately wants, Liasson touches on an important fact. Today with the Internet, Jones no longer needs traditional media to cover him in order for his actions to get worldwide attention. Therefore, given this reality, why waste time condemning Jones and continuing to talk about him? Everyone agrees he is despicable. Yet much, much worse are the people who resort to violence in response.

Instead the focus of conversation should be on figuring out how to convince Muslims around the world that if they really want to extract the most effective and harmful revenge on Jones, they should adopt the strategy already employed by most Americans in response to crazy people: peacefully ignore them.