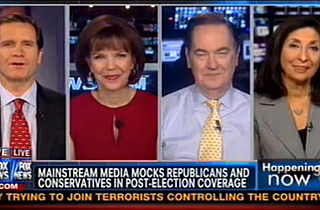 On Fox’s Happening Now this afternoon, Jon Scott hosted a panel discussion on the mainstream media’s “frenzied celebration” of President Barack Obama‘s re-election victory, including the Newsweek cover depicting the president as a Napoleon-like figure who has just won a “conquest.”

“The mainstream media erupting in frenzy, a celebration following President Obama’s re-election, ater taking time out of their post-election coverage to mock Republicans, trash conservatives and dump on the Tea Party,” Scott said while introducing the segment, asking the panelists for their “most egregious” example of media celebration.

“We don’t have enough time,” joked conservative columnist Cal Thomas. “The media set the parameters. Gas prices twice as much when George W. Bush left office, but when Bush was still in office the media were at gas stations all over the country and telling stories about how people could hardly afford to fill their tank. The homeless, they only exist when a Republican is in the house,” Thomas continued.

Fox contributor Judith Miller disagreed slightly, suggesting that the media reaction has largely been surprise: “I think that most media commentators, when you look at the coverage before they were talking about a late night and two and three o’clock in the morning, and maybe an electorial college that would be neck-and-neck. None of that turned out to be true. And so people had to recover, and they had to do some new and interesting things.”

Ellen Ratner agreed with the headline, noting that the electoral demographics confirm such a notion. However, she said, “the most egregious thing that the news media did and has done is not do a state-by-state analysis of how much there was a win by and what would have happened had there even been some slight demographic shifts in messages.”

Scott then mentioned that on election night, NBC’s Brian Williams suggested Republicans need to “shut down” Rush Limbaugh and Donald Trump, to which Thomas replied: “Now they are into censorship. What does that tell you?”

Continuing on to the Newsweek cover, Thomas said: “If that’s Napoleon then people who know anything about history know about Waterloo. He was overextended in Russia. I think if Obama takes this as a mandate to complete the restructuring of America, he is sadly mistaken.”