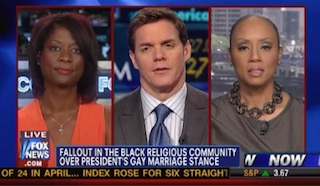 It’s amazing how quickly momentous occasions can become nothing but polling topics in the world of politics. Heck, Osama bin Laden only got to be a corpse for a few magical minutes before he and the photos of him became a Thing to be Debated™. So, when a sitting President of the United States of America actually comes out and says the gay people should be married (an unquestionably positive thing if you’re not, y’know, reading this post from either a cave or time machine), it only makes sense that the cable news channels wasted no time in looking at it beyond the prism of American history, and purely through the prism of November 2012. And, nearly a week later, we’re still discussing it in fiery segments like this Fox News panel in which Obama was accused of throwing the entire black community “under the bus.”

“If you look at how unemployment in the black community is deplorable, it’s 13%, it’s almost double among what it is for whites. And among black teens, it’s 38.2%. Those numbers are outrageous. and so Obama’s policies are failing our country, failing the black community. His energy policy is a regressive policy. High gasoline and utility prices are harming hard-working Americans and those who are unable to afford higher energy prices. So, really, his policies are harming Americans, harming blacks, and I say he has thrown the black community really under the bus in order to get money from the gay community and to get their votes.”

Fox News’ Bill Hemmer helped out by adding that “some people” are sensing “desperation” or fear in the Obama campaign. That vaguely defined group of desperation-sensing critics did not seem to include Santita Jackson, who disagreed with the implication.

“You know, I don’t think that this campaign is scared. I think that we have to dial this back a bit and understand that President Obama is the President of the United States. He’s not the Pastor of the United States. He made a political announcement, not a prophetic pronouncement. I think those who are going to stay home were going to stay home anyway because the excitement of 2008 would have been very, very hard to maintain in 2012. That having been said, I think that African-Americans overwhelmingly, those who vote will be voting for President Obama because we understand that he is the CEO of the government, a government that has a Constitution that he’s sworn to uphold, a government that has a Constitution that protects all americans; red, yellow, black, brown and white, straight and gay.”

That “Pastor of the United States” line is a good one. I’m clearly not the only one who thinks so considering Rev. Delmond Coates said the exact same line last night on Hardball and Rev. Raphael Warnock said it to his congregants over the weekend. That might seem cheesy but clearly people think it’s a good line so they should use it as much as possible.

After all, as we can tell, nothing good lasts long in politics.