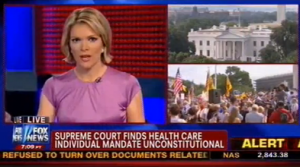 We have breaking news here on the Fox News Channel. The individual mandate has been ruled unconstitutional. This was a part of the law that was at the center of the oral arguments three months ago on this day when the justices hammered away at the White House and the administrations attorney questioning the validity of the individual mandate and asking the following pointed question if you can legislate healthcare where can the federal government be stopped. Shannon Bream is live outside the Supreme Court now with more…

Bream then correctly noted that Chief Justice Roberts had declared the mandate cannot be sustained under commerce law, but incorrectly added that this meant the mandate “is gone.”

Fortunately for the team, Megyn Kelly caught the mistake within the minute based on conflicting information she was reading on SCOTUSBlog, a site devoted to covering the Supreme Court. She also called for the network’s incorrect lower third to be updated:

[…] We need to update our lower third, which may not be correct right now.

Michael Clemente, the EVP News, Editorial at Fox News, issued the following statement regarding the initial mistake, noting that the Fox News team “gave our viewers the news as it happened:”

By contrast, one other cable network was unable to get their Supreme Court reporter to the camera, and said as much. Another said it was a big setback for the President. Fox reported the facts, as they came in.

Have a look at how it unfolded, via Fox News: