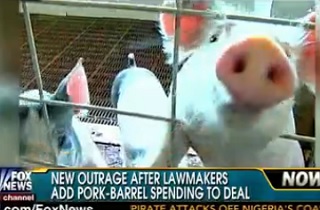 In the wake of the now-ended government shutdown, some of the items that were added to the continuing budget resolution to reopen the federal government are coming under scrutiny, particularly a nearly $3 billion appropriation for a dam project that conservative groups are attacking as a “Kentucky Kickback” for Senate Minority Leader Mitch McConnell. Washington Times reporter Stephen Dinan gave lengthy explanations of several questionable additions to the CR, but decisively concluded that a $174,000 Congressional death benefit was “clearly pork.”

Fill-in host Stuart Varney introduced the dam project with a clip of Senate Majority Leader Harry Reid (D-NV) defending the Ohio River dam appropriation, although it was Senator Lamar Alexander (R-TN) and Senator Dianne Feinstein (D-CA) who claim to have added it to the CR. Varney noted that Sen. McConnell also defended the item, saying it wasn’t an earmark. Tossing to Dinan, Varney noted “You’re one of the first reporters to have found the pork. Is it pork, that $3 billion completion of the Ohio River dam project?”

Dinan explained that “At one point it was earmarked, and most folks consider earmarks pork,” and that several years ago, “Mitch McConnell made this one of his earmark requests. So now the Army Corps of Engineers say they have to get this money. They say the White House requested it.”

He added that “The main problem is how it got stuck in the bill. It wasn’t in any of the earlier versions of the continuing resolutions, and these have been passed around for the last three or four weeks. All of a sudden this one appeared, and it’s landed everybody in hot water. It appears at the last minute, and goes to Mitch McConnell’s area.”

Varney also questioned a $3 million appropriation for a Civil Liberties Oversight Board, asking “Is that pork?”

“You know, that one you can question,” Dinan replied. “The question is, who exactly put that in there and where it goes to?”

“One thing that is pretty clearly pork,” Dinan continued, “and it’s a little touchy to talk but about, the $174,000 for the widow of Frank Lautenberg, the New Jersey Senator who died earlier this year.”

Dinan said the death benefits are “fairly regular,” but they have, in fact, been paid to surviving families of deceased congressmembers since before World War II. Dinan asked, given Lautenberg’s considerable wealth and the size of the national debt, “is that really the right call?”