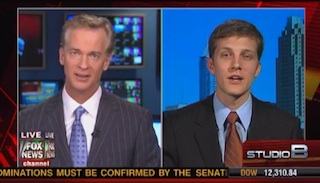 After watching much of the opinion coverage Fox News has done on Occupy Wall Street, you could be forgiven for thinking that critiquing the rich is a sin against man. Seriously, I’m pretty sure the phrase “class warfare” has been said more times on that network in the past few months than “this just in.” But a recent report from the Washington Post and University of Michigan that shows that the median net worth of Congress members has skyrocketed in the past year has raised some FNC producer’s dander (as well it should.) The figures are astounding.

The study found that, in the past 25 years, the net worth of regular Americans has gone down while that of the people who are supposed to represent them more than doubled. Fox News’ Trace Gallagher put numbers on the screen showing that the average Congressman was making 50 times that of the average American and asked how they could possibly be able to relate to the rest of us.

Political analyst James Kotecki pointed out that it probably wasn’t that rich people were “gaming the system” to get into Congress. Rather that, with campaign finance reform desperately needed and campaigns so incredibly expensive, we’ve now reached a point where it’s basically impossible for anyone aside from the super rich to run for office.

Now, I could start bitching that there’s a seeming hypocrisy where, if you complain about businessmen and bankers using their money and power control the country in a way none of us ever could, you’re mocked on The Five,* but, if you talk about the politicians doing the same thing, Fox News will jump on board. That’d be a waste though. This could so easily turn into a Right vs. Left thing (reading some of our comments, it seems like anything can) when, in actuality it’s one of those fabled issues where the Occupy folks and the Tea Partiers all agree; there’s something seriously wrong here.

*To be fair, after this post was written, The Five did a segment on this study and was fairly split in those that were upset by the numbers and those that, same with their reaction to OWS, thought the Congressmen should be respected for their success.

So, whether you’ve got a tri-corner hat on your head, a drum in your hand, or none of the above, lets all look at these awful, awful figures and realize that something needs to be done.