Shep Smith: ‘If You Touch My Junk, I’m Going To File A Lawsuit Against You’ 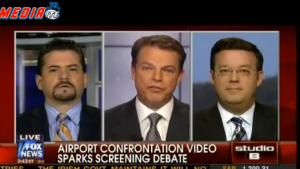 Not thrilled with the idea of having a random TSA agent “touch your junk?” Well Fox’s Shepard Smith has your back.

In a typically lively debate over the case of traveler-turned-viral-video-creator John Tyner on Smith’s Studio B Monday, Smith grilled attorney Seth Berenzweig on the TSA rules requiring full inseam “pat-downs” in cases where travelers decline to submit to electronic body scans:

BERENZWEIG: The federal government is allowed to apply reasonable conditions that are related directly to public safety if someone wants to enter into a consensual business transaction and fly on an airplane. This individual and everybody else has an opportunity… He had a choice, he could go into a visual screening detector where no one was ever going to touch him. Again, I know it’s intrusive and it is an invasion.

BERENZWEIG: First of all the TSA regulations provide that if someone’s under the age of 12, then they’re exempt from the regulations.

You go, Shep! Looking grim and unimpressed over the general state of junk touching, Smith concludes you do NOT want to be the guy who tries to touch HIS junk:

“The fact of the matter is, since the attacks of 9/11, as we have been screened and re-screened, and lighters have been taken, and shoes have been taken off, belts have been put over there, hats have come off, they have found a grand total of zero parts or pieces of any bomb anywhere domestically in the United States since the attacks of 9/11. Who’s the fool who tries to get on a plane with a bomb? You touch my junk, and I’m going to file a lawsuit against you.”

Gotta watch it–complete with Shep’s fist-pound on the anchor desk: