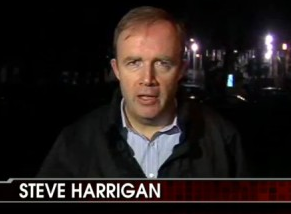 And you thought the spat between CNN and Fox News would be a one day story. Ha! Welcome to Day Three, my people! And we begin with Fox News correspondent Steve Harrigan finally delivering his counterpunch to CNN’s Nic Robertson, who notably suggested that Harrigan was–essentially–a lazy liar. Or a lying lazybones. In an interview with The Huffington Post, Harrigan fights back, saying Robertson has “a screw loose.”

And it doesn’t end there. Harrigan says the whole battling correspondents thing could’ve been avoided if Robertson had only “been a man” and walked across the hotel to talk to him face to face, but since that didn’t happen, off we go. Harrigan says Robertson’s “dull” and he does “bulls**t” reporting:

“I can stand outside my balcony and report what I see,” he said. “I can talk to people about what they see…but for someone to say I’m lazy who doesn’t know me, who’s not in our working condition, who doesn’t know our schedule…this guy has a screw loose!”

Harrigan also called Robertson “a hard worker,” but added, “I think he’s dull. I fall asleep when he gives a report.” He noted that many journalists in Libya, such as the four captured New York Times reporters, the BBC reporters who were subjected to mock executions, and the Al Jazeera cameraman who was killed, had been “heroic” in their reporting—even more, he said, than he had been. But he said Robertson could not claim the same thing.

“Is that heroic what he’s doing?” he said. “He puts on his blue blazer and gets on the government bus, and then pats himself on the back and calls that news? Bulls**t.”

CNN released a statement to Mediaite: “Fox news has reported and is continuing to report without an accurate and respectful grasp of the conditions for all the reporters on the ground – we have no further comment on this.”