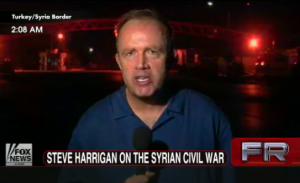 On his show yesterday, Shepard Smith devoted a segment to the recent Syrian government airstrikes that killed more than 40 residents in a rebel-held town. Fox News’ Steve Harrigan reported from the scene in town of Azaz, describing the horrific aftermath — explaining that the attack came out of the blue, with no apparent reason.

Citing the United Nations, Smith brought his viewers up to speed on the situation, describing the Syrian government’s “indiscriminate attack on perfectly innocent people.” For details, he handed the report over to Harrigan, who described the situation that followed the warplane strike on Azaz.

Speaking from the Turkey/Syria border, Harrigan recalled quickly getting out of Azaz following the attacks — though he’d earlier pushed to get into the town, feeling it would be one of the safer options. “Small town with very little rebel presence,” as he characterized it. Which is why the strike came as a surprise, he said, adding that there was “carnage everywhere.”

Harrigan went on to elaborate on an image he hasn’t been able to get out of his head: “An older man caught in the rubble, flapping his arms and his legs like a fish out of water. His family trying to use their hands to pull him out. It was really agony all around.”

According to the Human Rights Watch, which investigated the site of the strike two hours after it took place, said it killed more than 40 people and injured at least 100 others. “I thought we’d be safe there,” Harrigan said. “But it turned out not to be safe at all.”

It’s “hard to understand the brutality of this regime,” he said, adding that instilling terror in the country’s people seems a plausible motive. The bombing wasn’t a fight or a battle, he said, “it’s a warplane against women and children.”

A veteran war reporter, Harrigan also said he’s never seen such an attack. There was no rhyme or reason, “no apparent military reason” for this bombing, he said. “This was a slaughter…by a government against its own people.”

Citing the pain of the Syrian victims whose voices aren’t being heard, Harrigan pointed to the danger of being in the country. “I’m not going to put up another satellite antenna inside of Syria until [Syrian President Bashar al-Assad] is out of power,” he said. Clearly affected by what he witnessed, Harrigan was baffled by the situation in a where there’s no clear division between the the front lines of war and safer areas for civilians.

Some would use the term “genocide,” Smith said, asking for Harrigan’s take.

“That’s what it was,” he said. “Sometimes in war civilians get hurt, collateral damage happens when two sides are fighting against each other. Sometimes accidental missiles strike the wrong places. […] This wasn’t either of those. This was deliberate, this was calculated, this was daytime. […] This was to inspire terror by a government in its own people — and it’s extremely effective.”

The segment, well worth a watch, is below, courtesy of Fox News: