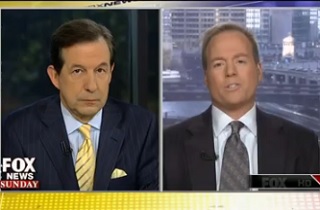 Since the government shutdown ended, and the media turned its attention to full-time coverage of the Obamacare rollout, the television news media has produced story after story about Obamacare “sticker shock” that have turned out not to be accurate. That streak came to an end this past Sunday, as Fox News’ Chris Wallace interviewed business executive Stephen Curry, who became the first Obamacare “victim” to accurately convey the difference between his pre-Obamacare health insurance premium, and what he’ll be paying under the new law. There is a catch, though.

Wallace also interviewed a former Republican activist named Cade Joiner (without disclosing his political activities), and while Joiner’s story didn’t add up, Stephen Curry’s claims about his premiums did match up with what is available on the health care exchanges, making him the first of any of these TV news guests that I’ve checked who actually got it right. The catch? Among other things, Curry’s health insurance premium is actually going down 42% under Obamacare, from $877 a month to $512 a month. The reason this story only mostly pans out is that I was unable to verify any of the rest of what Curry told Wallace. Even so, his tale is an excellent case study in the tradeoffs involved in Obamacare:

Again, assuming that everything Curry told Wallace is accurate, there are some real tradeoffs here, but they’re not quite as drastic as FNS portrays them, and had Steve Curry not had to share the segment with two other guests, he might have gotten around to that. Under his old plan, Curry says he had a $3500 deductible, and a $3500 out of pocket max, which means that once he met the deductible and racked up another $3500 in coinsurance, his plan would pay 100%. For example, if his plan paid 80% after deductible, Curry’s family would need to incur $21,000 in medical expenses before he reached that maximum. Under Obamacare, as he described the plan he was offered, that number would be $12,000. It is on this basis that Curry says he will have “$9,000 more out-of-pocket this next coming year.”

That would be true if his family encounters illness or injury sufficient to meet that out-of-pocket maximum (heaven forbid), but the average American never comes close to that in a given year. Under Obamacare, preventive visits are covered at 100%, and although Mr. Curry didn’t say, it’s very possible that his new plan would allow other doctor’s visits without applying deductible, just a copay. In a typical year, with about four doctor visits apiece, Curry’s family would never come close to meeting either plan’s deductible, yet he stands to save over $4,000 a year in premiums under Obamacare, while still being protected against a catastrophic medical bankruptcy.

That doesn’t mean that Mr. Curry, or anyone else, should feel happy about being forced into a new arrangement, but it does put things in perspective. Yes, Mr. Curry might save money, and he and his family will enjoy consumer protections under the new law that were not available before, but he’s also not getting to keep the plan he liked, and according to him, the only reason his old plan didn’t meet the new standards was because it didn’t include “maternity, pediatric dental, extra chiropractic benefits and mental health care extra benefit.”

When I saw that Steve Curry’s claims about his premiums were accurate, I tried to verify the rest of what he said, in order to give his portion of the Fox News Sunday segment a clean bill of health. I contacted him via email, and asked if he could furnish details about his old plan, and the new one being offered, and asked him about the tradeoff between the actual savings he’ll probably realize, as well as the new law’s effect on his business. Mr. Curry is a vice president with NFP Benefit Planning services, which describes itself as a “subsidiary of National Financial Partners Corp.”

He agreed to an interview on Monday, and referred me to an NFP marketing executive for some background information. From there, I was referred to several NFP spokespeople, and a few representatives from the PR firm Sard Verbinnen & Co., who informed me, today, that “it doesn’t look like we are going to be able to help out this time with a Steve Curry interview due to timing/scheduling.”

They also failed to provide any background information on the heath plans in question, not even the names of the plans, despite repeated requests.