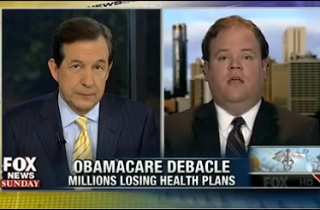 If news consumers had a nickel for every bogus Obamacare horror story on TV, they wouldn’t need Obamacare. Add to the list the story of 34 year-old Georgia native Cade Joiner, who was interviewed by Chris Wallace on Fox News Sunday this week. Introduced simply as a “businessman” who is “Losing Health Plan,” Mr. Joiner’s story, getting a letter in the mail cancelling his old health insurance, and “calling around” only to find the new plan cost much more, sounded familiar. Some of the language Joiner used about Obamacare being “not ready for prime time” sounded even more familiar.

In fact, Mr. Joiner might even look familiar to you, if you’re into Georgia Republican politics. Here is the same Cade Joiner introducing Ralph Reed at the 2001 College Republican National Convention:

At that time, Joiner had just finished a stint as President of the Georgia Association of College Republicans, but more recently, he was a campaign fundraising organizer, and then a campaign finance committee co-chair, for the successful reelection bid of Georgia Secretary of State Brian Kemp (R-GA).

None of this necessarily means Joiner is a bad person, or even that he’s not a credible guest, but these are things that Fox News Sunday, and host Chris Wallace, should have disclosed to viewers. Wallace also should have asked Joyner where he “called around” to find an individual health insurance policy for over $500, when the most expensive policy available in his county of residence costs about $350.00, and there are several plans available for less than he was paying before. It might be tough to get viewers to sympathize with a Republican fundraising heavyweight whose insurance premiums went up, but nearly impossible if they went down.

Cade Joiner may have an honest gripe with President Obama’s assurance that he could keep his plan, and there may well be some tradeoffs for some people when it comes to individual insurance, but even though consumers like Cade Joiner are still having trouble using the Obamacare website, there’s little excuse for news outlets to fail to do such basic research. There’s also no good reason to conceal Mr. Joiner’s political activism, unless the point is to make him seem dishonest upon its revelation.