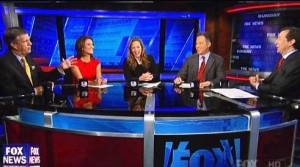 When the Supreme Court rules on the Arizona immigration law case, they will either strike down the Obama administration’s objections and uphold the law, or strike down the law and uphold the Obama administration’s objections. Simple enough, right? Well, this led to some awkwardly confusing banter on Fox News Sunday today, where Chris Wallace and the panel got mired in a confusing back-and-forth with people misspeaking and confusing one thing for the other.

Wallace first asked how a potential ruling one way or the other would impact Mitt Romney‘s campaign. Washington Post reporter Charles Lane noticed that Romney has been dialing down the rhetoric on immigration in recent weeks, but as for the case itself, he said the Supreme Court would strike down the law. Lane said he witnessed something surprising during the court’s hearings.

“The justice who asked the toughest, most quotable question against the Obama position on this was Sonia Sotomayor, the first Hispanic justice, the one who said, ‘Your argument’s not selling very well up here.’ If her vote goes against the administration, I think that would go a long way toward, you know, defusing the whole question of whether this is a one-sided…”

Brit Hume interrupted to ask Lane if he meant the law would be upheld or struck down. Lane said he thinks it would be struck down… despite him sounding like he was expecting it to be upheld. Wallace interjected to remind Lane that Sotomayor was being critical of the Arizona law. Hume said that Obama’s people want the law upheld, before Wallace immediately corrected him. Hume said he meant they want the lower court’s decision upheld.

At this point, the panel was so hopelessly confused by what happened and who was arguing on behalf of what. Lane clarified for Wallace that he thinks the Supreme Court will rule against the Arizona law… wait, no, in favor of it. Wallace started laughing and joked that it would be nice if they could do a “take two” on this. When b-roll of the Supreme Court justices popped up on the screen, Wallace said he was glad for it so they could all wipe the egg off their faces.

As the discussion wrapped up and Wallace went to commercial, he promised viewers they would “hit the reset button” for the rest of the show. I don’t know about the rest of you, but this whole conversation reminds me of this Monty Python sketch. Classic confusing situations!

Watch the collective brainfart below, courtesy of Fox: