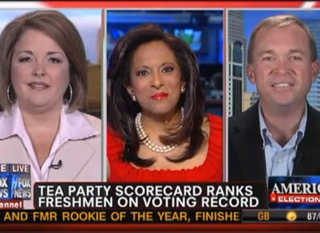 The 2012 elections are not just a challenge for incumbent President Obama, but for a number of freshmen Congressmen swept into the House of Representatives by the Tea Party movement in 2010. On Fox News today, anchor Uma Pemmaraju hosted a panel featuring Tea Party Express leader Amy Kremer and Tea Party Rep. Mick Mulvaney in which they debate whether the campaign rhetoric matched the voting records of the Tea Party Republicans. In that vein, Pemmaraju noted that among those voting more moderately was firebrand Rep. Allen West, and asked Kremer whether she thought he may be challenged from the right in his district.
RELATED: Rep. Allen West: LGBT Workplace Discrimination ‘Don’t Happen Out Here In’ America

Pemmaraju began by asking Kremer whether she was surprised at the rates at which Tea Party Republicans did not distinguish themselves from establishment Republicans in voting. “If you listen to what the mainstream media has been saying, and the left has been saying… is that the Tea Party movement and Tea Party Republicans were driving the country over the cliff,” she argued, “this proves that couldn’t be further from the truth.” She did note that she thought the lack of “strong fiscal conservatives” could make it more difficult for Republicans who affiliate with the Tea Party to vote further right.

Rep. Mulvaney, who has a very good record with the Tea Party, argued that he did not oppose any consistency. “It doesn’t bother me if someone runs as a moderate and votes as a moderate.” He expressed support for the idea of keeping tabs on Congressmen’s votes the way the Tea Party has done, to make sure “folks got what they bargained for.”

Pemmaraju then brought up the example of Rep. West, noting that he voted against spending cuts on some occasions. “It’s up to the constituents in the district,” Kremer argued. “It’s highly unlikely you’re going to get someone more conservative than Allen West,” she noted, and addressed Sen. Scott Brown as well– for his constituency, a far-right conservative, though not for every district in America.