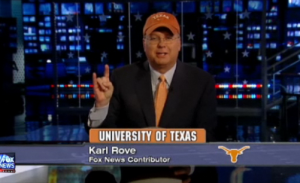 On last night’s Hannity, the Fox News team finally revealed their true allegiances. To sports teams, that is. In honor of the start of the 2009 college football season, an assortment of Fox personalities went around and gave shout-outs (shouts-out?) to their alma maters. Of course they’re all big college football fans. Watch the video, and find out who roots for which team, after the jump. We’ve also compiled a handy list, for if you have the ADD.

Below is a list of Fox News types and the college football teams they root for, in order of appearance on Hannity. Though if you just read the list, you’re really missing out on the enjoyable Looney Tunes-like antics of the video, which include an angry executive producer sending his underlings to the North Pole and another angry guy turning red and having steam coming out of his ears.

Greta Van Susteren (On the Record): University of Wisconsin