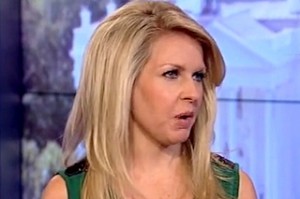 Fox News analyst Monica Crowley is expected to join President-elect Donald Trump’s administration as a deputy national security adviser. Mediaite reached out to Fox News and a spokesperson confirmed that her contract has been terminated.

Crowley, who also hosts her own radio show, was previously rumored to have been in the running to serve as White House Press Secretary, worked for former President Richard Nixon after he left the White House, working as a research assistant and advising on two of his books. She also wrote two books about Nixon on her own.

Per the Daily Beast, it wasn’t clear what her role would be yet and if it would be similar to Ben Rhodes’.

The sources said it wasn’t yet clear if her title would mirror that of Ben Rhodes, who currently serves as the U.S. Deputy National Security Advisor for Strategic Communications. Rhodes was one of Obama’s the most influential staff members and had a critical hand in shaping the administration’s global security policies and then selling those policies to the world.

Crowley was a vocal supporter of Trump’s throughout the election. Outside of a four-year absence between 2004 and 2008, Crowley had been with Fox News since 1998. She’s also hosted The Monica Crowley Show on radio since 2002.

She’ll serve under Gen. Michael Flynn, who has been named National Security Adviser. Another Fox News alum, KT McFarland, was also added to the team as a deputy national security adviser last month.