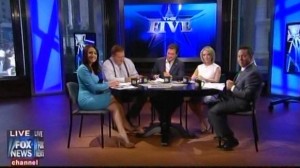 Fox News’ new afternoon panel show The Five had its second episode today and started off with a segment on presidential hopeful Rep. Michele Bachmann. The group went through a number of what they felt were “personal attacks” against the Congresswoman coming from, in order, fellow Minnesotan Rep. Keith Ellison, ABC, and Bill Maher and pointed out what they (for the most part) felt was a “double standard” in the treatment of a strong conservative woman.

First up was Ellison who told college activists that conservatives like Bachmann wanted women to “get back in the kitchen and to take her shoes off and get pregnant.” The comment got a round of thumbs down from the panel. Bob Beckel, however, pointed out that Bachmann has made quotes from the Bible in the past about wives needing to be “submissive” that could leave her open to this kind of criticism.

The oddest statement came from Greg Gutfeld who thought it was “rich” that these statements came from Ellison since he’s a Muslim. Uh…ok then.

Next up was Bill Maher who took heat for calling both Bachmann and Sarah Palin “MILFs.” The panel all agreed that this was misogyny and claimed that there would be a huge uproar if anyone said that about a Liberal politician. This time Gutfeld was noticeably silent. It was noticeable since he had spent a good amount of time yesterday talking about how hot he thought Palin was and wondering why all Liberal women are uglier.

Finally was ABC who aired undercover footage that an activist group made at Marcus Bachmann’s clinic which has been accused of teaching patients they can “pray the gay away.” As everyone went after the “hit piece,” Beckel wondered why there wasn’t any similar uproar when Fox News repeatedly aired the undercover footage of ACORN. Eric Bolling claimed the difference was that ACORN was being suspected of doing something illegal. No one mentioned the NPR videos.

All in all, the show remains entertaining. We’ll see how it does as it continues its first week.

Unrelated grammar question: If I’m going to start covering this show, I need to get something straight. In the headline up there, should it be “accuse” or “accuses?” By using the italics it seems like the show is making the accusation and therefore it’s singular. However, they are “the five” hosts.