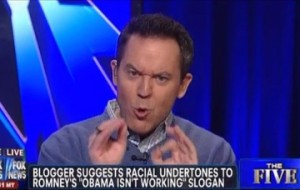 On the heels of a column by Mediaite‘s Tommy Christopher questioning the racial sensitivity of a Mitt Romney campaign banner which read “Obama Isn’t Working,” a Fox News personality named Greg Gutfeld accused Mr. Christopher of being a racist, asking his fellow The Five panelists “If you see that sign and immediately think it’s about lazy black men, aren’t you the racist? Isn’t Tommy Christopher the racist for pointing that out?”

Gutfeld added “He presumes to know what is in your head because it’s in his head. That is idiotic.”

When reached for comment on Gutfeld’s accusation, Mr. Christopher said “Look, I have nothing but respect for the first six Police Academy movies, but the guy is way off base here. Recognizing a stereotype doesn’t make you ‘racist’ any more than calling the fire department makes you an arsonist.”

Christopher also pointed out that his column didn’t “presume to know” what was in anyone’s head. “I agreed with my friend Goldie Taylor that, if the Romney campaign had a more diverse staff, maybe they would have said, ‘Hey, maybe we can think of another way to say that.'”

He added that, where most conservatives are concerned, he generally doesn’t presume that anything is in their heads. “That’s kind of the point,” he says. “It just didn’t occur to them that this could offend anyone, or they didn’t care.”

Beckel added, “I’m not a racist, it was the first thing I thought about it as soon as I saw it.”

Co-host Eric Bolling made an effort to defend Mediaite, singling Christopher out as the lone “partisan” who is “the guy that went at it with Breitbart,” but that the site is “very good,” and “if you say something wrong, they call you out on it.”

For example, Christopher called Bolling out for saying that President Obama was hosting “hoodlums” in the “hizzouse,” and to his credit, he apologized.

Reaction to the story from conservatives on Twitter has been harsh as well. Christopher says, with a laconic shrug, “This is the conservative modus operandi on questions of sensitivity. Other people’s feelings are completely subservient to their own refusal to give a shit about them. It’s a free country, though. For now.”

He pauses to take a swig from his ice cold can of Diet Dr. Chill. “You know what being called ‘racist’ by the guy from Short Circuit is?” he says, as I sit, transfixed. “That’s a white people problem.”