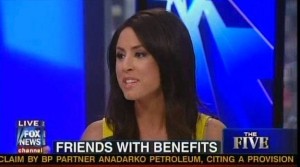 So how did Fox News’ new show The Five end their first week? With an episode in which Andrea Tantaros explained how sick she was of Casey Anthony (while introducing an entire segment on Casey Anthony), Greg Gutfeld dressed up in a beat poetry outfit to read Esquire’s “How Can We Not Love Obama?” article, and Bob Beckel said Jose Baez looks like “a drug deal I once had.” They also had one of the most uncomfortable television segments I’ve ever seen in which Gutfeld explained why actress Mila Kunis was a great American and Tantaros explained why ladies just have too many emotions and stuff for casual sex.

The segment was based on the contents of an interview Kunis did with GQ. After lauding her agreement to accompany a marine to a dance, Gutfeld read what the actress had to say (which is good because I’m sure most readers were distracted by the accompanying photo) about the titular type of relationship in her new movie No Strings Attached Between Friends with Benefits:

“GQ: Your new movie is called Friends with Benefits. Ever been in one of those relationships?

Mila Kunis: Oy. I haven’t, but I can give you my stance on it: It’s like communism—good in theory, in execution it fails. Friends of mine have done it, and it never ends well. Why do people put themselves through that torture?”

First off, the panel was very, very excited that Kunis takes a hard stand against Communism since, as Gutfeld explained, so many Hollywood types stupidly praise it (Gee, wouldn’t it be great if we made some kind of list, like a black list or whatever to round up these dirty Hollywood Reds?). They were also heartened by her other comment (except, of course, for Beckel who helpfully discussed how much fun he had in the time period “after the pill and before AIDS”). Tantaros was especially heartened since girls just can’t handle that kind of thing.

“TANTAROS: Look, women can not have sex like men, Bob, and this notion that is perpetuated by Hollywood and MTV that’s all, ‘Women, just do what you want,’ they can not function like men. It always ends badly. Every woman out there knows what I’m talking about.

BECKEL: Women can’t have sex like men? You can last all night! Look at Greg!

TANTAROS: How many women have called you up all night, stalking you, crying?

Finally someone says it the way it really is! You hear that, ladies? Don’t do what you want! Only us guys have the right parts for that kind of thing.