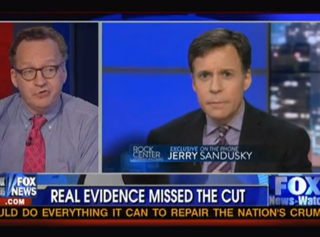 With the news that former Penn State assistant football coach Jerry Sandusky will be facing the rest of his life in prison for child sexual abuse, the Fox News Watch panel took a look at the last time Sandusky spoke to the media– to NBC’s Bob Costas, in an interview that the panel alleged was edited to not “be forthcoming” and perhaps try “to preserve a relationship with Sandusky or Penn State.”

RELATED: Sandusky’s Lawyer To Anderson Cooper: ‘I Promised The Jury Jerry Would Testify’

The bit left out of the interview with Sandusky featured the newly minted felon saying that he did not “seek out every young person for sexual contact,” and that there were “many” he did not solicit sex from, leaving the clear question open as to whether not asking “many” for sex meant that he had asked any at all. Why, asked host Rick Folbaum, would NBC not air that part of the interview? Deneen Borelli found the entire edit “disturbing,” accusing the network of “gross irresponsibility” for not airing the clip. “Not a good week for NBC News any way you slice it,” Folbaum concluded, given Sandusky’s conviction. Ellen Ratner wondered why the clip did not even appear online when it was clearly such a fascinating bit of audio– Sandusky all but confessing to approaching at least some boys for illicit activity.

“[Maybe they were] trying to preserve some sort of relationship with Sandusky or [Joe] Paterno or Penn State, they knew they had something hot here,” Jim Pinkerton argued, with Judith Miller concluding the segment: “it was part of a pattern there and NBC News.”