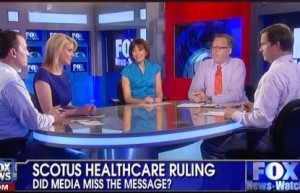 By far the biggest story of this week was the Supreme Court’s ruling upholding the constitutionality of fining individuals for not having health insurance, a move that Justice John Roberts wrote fell under the taxing authority of Congress. On Fox News Watch today, the panel noted that his decision to side with the more liberal justices appeared to change the tone of liberals in the media when referring to him, who now saw him as a “hero” for what he wrote.

Jim Pinkerton joked that the turnabout by the media in warming up to Justice Roberts had been dubbed by “some wiseguy in DC” the “Greenhouse Effect”– namely, Linda Greenhouse, whose writing “moved the courts in her direction.” He also joked that a week ago, Justice Roberts was a “right-wing goon,” to which host Jon Scott interjected to point out how Chris Matthews reacted– going from claiming Justice Roberts could be “compared to a Civil War-era supreme court judge who upheld the Dred Scott Slave Act” to “a hero.”

“Here the bias is so obvious,” Judith Miller replied, noting that at least the “legal media see his reasoning as specious and his about-face as, well, an about-face.” Kirsten Powers, on the other hand, took a look at the way conservative media reacted– namely, “very, very angry.” he agreed it was “historic” and “a big victory for Obama,” but didn’t see Justice Roberts as siding with conservatives, given that “his reasoning was completely different than theirs.” Richard Grenell agreed, explaining that Justice Roberts had now “saddled ‘the President’ with a terrible scalet T… he has to go into the campaign season with the label of a taxer.”

As for Mitt Romney and the election, Miller expressed some surprise that Romney had not “taken advantage of the moment,” though “he did talk about the elements that he would have in his plan.” Pinkerton thought the President was not in the best position given the decision. People “oppose Obamacare as a thing, and if he spends the next five months defending it, that’s a bad thing,” he concluded.