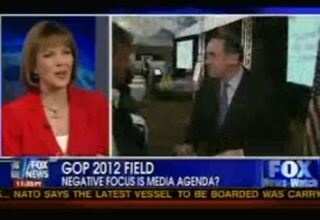 Making sense of the 2012 Republican contender field is anyone’s game at this point, though with the field slightly more narrowed down the questions shift from who is running or not to why. On today’s Fox News Watch, the panel grasped for adequate oratory to describe the bizarre experience of following this race, and came up with some of the weirdest back-to-back political turns of phrase in recent memory.

After beginning the segment trying to make sense of Newt Gingrich‘s glittery implosion last week, host Rick Folbaum moved the panel on to Mike Huckabee‘s decision not to run, and the media’s frustration that they wasted so much time on him. Since he was a frontrunner, however, the panel didn’t seem completely shocked that the media followed him. Panelist Judith Miller argued that the coverage was warranted, but then veered towards the way the media talked about these candidates. “There was a lot of bodily fluid analogies and metaphors being used. ‘He didn’t have the heart,'” she explained. “‘Donald Trump had no fire in the belly.'”

Cal Thomas stepped in to clarify her comments: bellies and hearts were, in fact, not bodily fluids. But he didn’t really contribute to making the conversation less weird, immediately after that calling what Huckabee did to continue to get attention while not running for president a “political striptease,” which is likely a pleasant image for everyone. He explained that, while he knew Huckabee was not going to run this year, “he kept the media on a hook and great speaking fees and they wanted to be near somebody who might run for president.”

Given the amount of time lost, Folbaum then asked whether the media attention was an “orchestrated campaign by the White House to have the president come out and announce as early as he did,” such that the Republican field would be motivated into action and peak early. Panelist Kirsten Powers disagreed with that theory, adding that Huckabee was a special case because “he was one of the people who did very well in the last election.”