Fox News Watch On Obama: When Will Media Say ‘We Were Wrong About This Guy’ 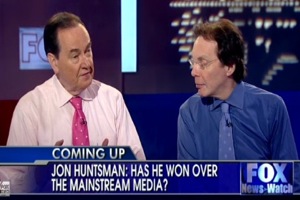 President Obama’s speech on Afghanistan and war strategy moving forward set the stage for a fun debate on Fox News Watch between conservative commentator Cal Thomas and liberal commentator Alan Colmes. Given that no one on the political spectrum seems happy with Obama’s plan for Afghanistan, Thomas senses a “disturbance in the liberal force” and playfully referenced Colmes as Jabba the Hut. Yet even if liberals are upset with Obama now, Thomas is confident the media will fall back into line by election time.

Colmes refuted the idea that the media actively supports Obama, and instead shifted the argument to not understanding why anyone continues to advocate we stay fighting in Afghanistan when the people responsible for 9/11 are long gone. Yet Thomas wanted to return to criticizing the media:

“You know what the press is really reluctant to do and I think they’re going to have to do it at some point. . . . They were cheerleaders leading up to 2008 election. This was the guy who was going to part the waters, he was going to smooth out the crooked places, do all these things, cure tooth decay and now they’re realizing he’s mortal just like every other President. When are they going to come to their senses and say ‘we were wrong about this guy?'”

With seconds left before the final buzzer for this round, a frustrated Colmes very humorously and sarcastically responded: