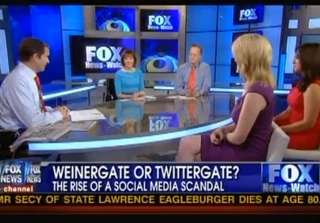 Well, this is an interesting theory: On Fox News Watch today, the round table panel got to take their first shot of making sense of “Weinergate,” the bizarre mystery surrounding a lascivious photo that appeared on Rep. Anthony Weiner‘s Twitter account. The strangest part of the whole affair has been the aggressive and confusing way Rep. Weiner has approached the media, and it led panelist Jim Pinkerton to conclude today that “Weiner is actually enjoying this.”

Host Jon Scott introduced the segment with a recap of this week’s Weiner highlights, calling his interview behavior “evasive” and wondering how this could benefit Rep. Weiner. Judith Miller agreed: “he is being his own worst PR person,” he noted, suggesting that being honest and non-combative would probably be a better approach.

In an attempt to explain why he is behaving the way he is, Pinkerton argued that it’s possible he is enjoying the attention.  “He told Paul Ryan… ‘I’ve got more Twitter followers than you do,'” Pinkerton noted, arguing that the bragging was a sign that the type of publicity he is getting doesn’t “make any difference to him anymore.” Fellow panelist Kirsten Powers disagreed as to the enjoyment part of the argument, though did allow that Rep. Weiner was likely “making lemonade out of lemons.” “He has made a lot of lemonade this week,” Andrea Tantaros responded, noting that he is particularly getting hurt by his attitude towards the media– “you can’t lawyer the media.”