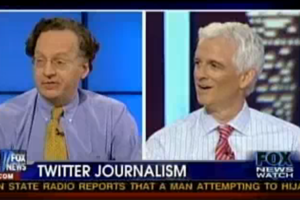 The evolution of news media in light of personalized, instant-gratification social networking sites like Twitter has the landscape evolving at a rapidfire pace. For some in the media, this is a reason to mourn the passing of a more thoughtful time in exchange for the far too easy ability to take cheap shots sans editors and regret it in the morning. But some journalists, like those on the Fox News Watch panel, find the newfound honesty refreshing in a stale industry.

Today’s Twitter segment was a response to a Daily Beast column proclaiming media criticism dead specifically because of Twitter– why put effort into an extended critique when 140 characters can convey the same sentiment? Unlike the author of that piece, however, not everyone on the panel agreed that Twitter had created a generation of “sniggering cheap shot artists.” The Fox News Watch panel begged to differ.

“You look at the window into our souls,” Judith Miller noted of the medium, “and lots of times you don’t like what you see.” This, she continued, was not necessarily a bad thing. Fellow panelist Ellis Henican interjected about his practices– regardless of the relative damage or benefit to the art of journalism, “I’m just glad I finally found a platform that matches my attention span.”

“I think Ellis hit it there for a lot of us,” Jim Pinkerton replied, causing Henican, who was making a simple joke, to stare at him incredulously. In response, Pinkerton explained that Twitter is “headlines, it’s 140 characters. Let’s you say one thought, and I think that’s what most of us are good for in any one session.”

The segment from today’s Fox News Watch below: