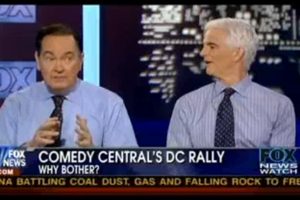 The celebrity efforts uniting behind Jon Stewart and his “Rally to Restore Sanity” have struck a nerve with the crew of Fox News Watch, who today examined whether companies using their corporate money to provide free transportation for the rally was appropriate. That made most of the panel queasy, but Cal Thomas objected to something else entirely: Stewart mocking Arianna Huffington‘s accent when she promised to provide buses to his rally.

Thomas, of Tribune Media, was reacting to the initial announcement on the Daily Show that the Huffington Post would be providing free transportation from New York to Washington, DC on the day of the rally. To this announcement, the other panelists seemed more concerned about what it would mean for shareholders of the company, particularly Fox News Watch regular Jim Pinkerton. Judith Miller, who has found herself in the crosshairs of the Huffington Post once or twice in the past, agreed on that point, but took a sharper stab at Huffington for her treatment of bloggers, suggesting she should pay them once in a while.

Meanwhile, Thomas had his own concerns with Huffington herself, but made a much touchier point about Stewart’s behavior:

“She needs to make up her mind whether she is a journalist or an activist. She shouldn’t be both. But the other thing I want to point out in that Jon Stewart clip that we were all laughing at, it was very funny– he was mocking her accent. Can anybody think of another instance where, let’s see, the host was mocking the accent of an Al Sharpton, or a gay person? How does he get away with this?”

This isn’t the first time that claims of cultural insensitivity have been raised against Stewart, but the last time it happened, someone got fired. And there’s also the fact that in the history of the program, Stewart probably has mocked Al Sharpton at some point, though the thought of someone on the right acting similarly does raise a fair point about both ethnic politics in the media and the continued rift between Latino white ethnics and all other white ethnics (like Huffington, who is Greek-American).