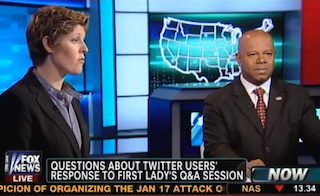 First Lady Michelle Obama took to Twitter yesterday to host a Q&A about her “Let’s Move” initiative — but shortly thereafter, others on Twitter utilized the #AskFLOTUS hashtag to be critical of the effort or ask about different topics, like Benghazi and the cancellation of White House tours. On Tuesday, Megyn Kelly‘s panel questioned whether that was “appropriate.”

Most of the questions were relevant to the topic at hand, Sally Kohn noted, but “you gotta give it to Republicans and to the far right on this one. They have at least managed to be extremely consistent on attacking this administration for everything under the son.”

Some examples of the critical response Obama received are:

Kelly then proposed a hypothetical: If Laura Bush had hosted a similar Q&A and received “so much negative feedback about her husband’s decisions…then I’m sure some on the right would be outraged that a sitting first lady was subjected to it.”

For starters, David Webb said, there’s no way to determine it was the far right. Moreover, he argued that while some of it may have been disrespectful, it echoed the frustrations many have with the administration and its transparency — “with bad optics, an out-of-touch administration, and frankly, a more imperial family.” (Kohn found the last characterization particularly amusing.)

Comparing the first lady to New York City Mayor Michael Bloomberg, he said Obama, too, was being a “nanny.” As the he started to go on somewhat of a tangent, Kelly interjected to note that criticism is not unique to this first lady, recalling 2009 presidential inauguration when she said watched Laura Bush and Barbara Bush get booed.

“I don’t think personal attacks in general are appropriate for our politics,” Kohn responded. But Republicans are losing with voters and losing on issues, she added, so they’re on the offensive highlighting issues that only a “small minority” are concerned about.

It’s not a far left/far right issue, Webb countered. It’s about disrespect and American people’s frustration. “That is a matter of redacted pages with black ink.”

Should the first lady be “immune” though? Kelly asked. Is she “fair game for negative political feedback”?

Not necessarily, Kohn argued, but she is afforded respect. But both sides of the aisle should be held accountable, which doesn’t exclude her because she has been a political figure.