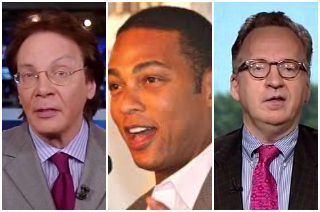 A Fox News Watch panel on Monday afternoon defended Don Lemon’s recent controversial comments about African Americans, with both conservative Jim Pinkerton and liberal Alan Colmes praising the CNN anchor for his “honest” and “courageous” thoughts, and wondering if Lemon was receiving heightened criticism as a black man voicing an opinion unpopular among the African American community.

“Lemon is being clobbered in the Twittersphere by the likes of Golder Taylor at MSNBC,” Pinkerton said, comparing Lemon to fellow Fox analyst Juan Williams. “The black who says it, they come come after him much, much harder. Bill O’Reilly says it, the liberal gatekeepers don’t really care, they just expect it out of him. But when a Juan Williams or a Clarence Thomas or a Larry Elder or a Don Lemon others say it, they go after him because they want to eliminate that thought from the discourse.”

RELATED: Worse Before It Gets Better: Lemon-O’Reilly Race Agreement To Rile Up Cable News War

“I object when he gets called Uncle Tom for having a different point of view than people think you’re supposed to have,” Colmes said. “We’ll have true equality in this country when someone like Don Lemon or anybody else of color can make a statement that doesn’t conform what the so-called majority feels, being called names, without being called an Uncle Tom. We can have a diversity of opinion among people of color without that kind of name-calling.”

“He is a very interesting figure,” Pinkerton said of Lemon. “Let’s hope he has the courage to keep speaking out on this particular issue, because it’s probably the most important.”