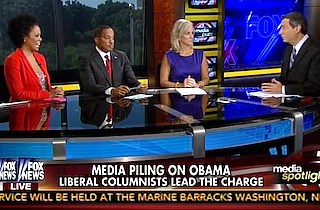 Howard Kurtz quizzed his Media Buzz panel Sunday morning on why not just conservative but liberal commentators were piling criticism on President Barack Obama, and whether it was due to his handling of Syria or simply the end of his second-term honeymoon period.

“I think conservatives would say five years too late,” the Blaze’s Amy Holmes said. “Too bad we didn’t have the scrutiny of President Obama when he was a candidate.”

“Yes, I think the honeymoon is over,” she continued. “It might have even been kicked off by Matt Damon when he was on BET and he said the president had broken up with him, and that was over the NSA scandal, and all of these scandals that have been piling on President Obama, capping off with Syria and the mishandling, bumbling of that issue.”

“Washington is about kicking people when they’re down,” said Fox analyst Laura Ashburn. “There is a reason President Obama got a second dog—he needed another friend, okay? He is perceived to be weak, he’s down in the polls. People are going to go after you. I think that’s part of it, there’s a piling on aspect. I was shocked by Maureen Dowd, who traditionally supports him, in an op-ed in the New York Times, who said the man who connected so electrically and facilely in 2008 is causing Americans to over look his thin resume. You never would have heard anything like that.”

RELATED: Juan Williams to Fox Guest: ‘Has it Ever Occurred to You Conservatives Are the Media?’

“I think you did,” Juan Williams said. “We did hear the criticisms of President Obama. There are still people out there, not just ‘thin resume,’ they say he is a mystery, where did this guy come from, how could he exist, all that. So we hear criticism, mostly from the right. There’s no shortage of that.”

“I will say on the left: I think a lot of these people think they’re gaining credibility by jumping in at this point when, as you rightly said, he made some crazy moves that people just don’t understand. What he was doing on the Syria thing? Turns out so far he’s escaped unharmed, and the country is better for it because we didn’t have to go to war.”