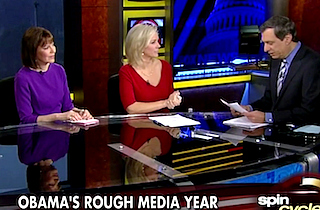 During a discussion about the media’s coverage of the Affordable Care Act rollout, a Media Buzz panel noted that the media focus was beginning to shift toward positive news stories of uninsured receiving health coverage, and that stories of lost coverage will soon be forgotten.

“POLITICO has a big piece that says the White House looks to spread Obamacare good news with a flood of success stories,” host Howard Kurtz began. “And the Washington Post has a big piece the same day saying, ‘Adam Peterson’s life is about to change, one of the many millions of uninsured Americans benefiting from the Affordable Care Act.’ So I think we’re going to start to see some media focus, spotlight shifting to those who are getting insurance.”

“We actually should have that happening,” Miller said. “That’s the normal course of news coverage.”

“It’s part of the story,” Kurtz conceded. “But people who lost their coverage, or have to get more expensive coverage, it’s not like the media are going to forget about that.”

“I think it’s going to be harder at that point for the media to stay focused on two stories,” Ashburn said. “The media have a very hard time focusing on one things. Now you have to stories of people who are going to say, ‘Oh, I’m so happy, this is so great,’ and the rabble rousers aren’t going to get as much attention.”