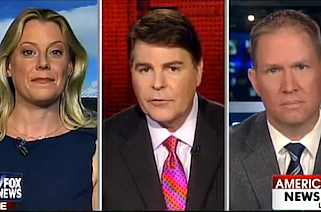 A Fox News panel pre-gamed the George Zimmerman trial on Sunday afternoon, debating the crucial strategies and pieces of evidence less than twenty-four hours before the most high-profile trial of the year begins.

Host Greg Jarrett read Florida’s self-defense statute, which says, “A person is justified in the use of deadly force and does not have a duty to retreat…if he reasonably believes such force is necessary to prevent immanent death or great bodily harm to himself.”

“Or reasonable to the six women who are sitting in judgment of George Zimmerman,” former criminal attorney Robert Schalk said. “Another big thing for the Zimmerman team is, he suffered injuries. They have photos of it. There’s no refuting that. The prosecution can’t walk in there and say that George Zimmerman did not suffer any injuries at the hands of Trayvon Martin.”

“Let’s not forget the other two elements to the Stand Your Ground rule,” trial attorney Rachel Self said. “You need to have been lawfully present, and you need to have been engaged in lawful activity…This is what this case is going to hinge on. If [Zimmerman] provoked this thing, and he was not engaged in lawful activity, and he provoked the assault or assaulted Trayvon Martin first, Stand Your Ground isn’t going to fly, and I find it interesting that they waved their right to a pretrial hearing.”

The panel also discussed the exclusion of expert voice testimony. The prosecution had sought to admit testimony from two voice experts who would have argued that the 911 call featured Martin screaming, but a judge denied their request on Saturday.

“It’s a big win for the Zimmerman defense team,” Schalk said, “in the sense that these experts won’t be allowed to come in to say that Trayvon Martin is heard on the tape almost begging for mercy, which would completely harpoon the defense of self-defense, because it would show that Zimmerman was in control.”

Self agreed that the judge was right to exclude the testimony. “It needs to be scientifically reliable in order for an expert to testify,” she said. “This seems like it might have been junk science. Is there peer review of this type of testing that happened? Were there other experts that were able to analyze it?”

“Truth be told,” she continued, “the best evidence is the people that know the voices to stand up there and say yes, I recognize that was my son.”

“Including Zimmerman, if he takes the witness stand,” Jarrett said.

NOTE: Mediaite will have extensive cover of The George Zimmerman trial starting tomorrow