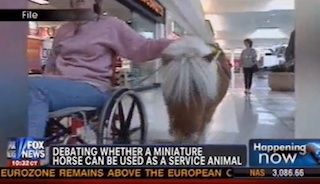 Guys, I’m a hypocrite. Just two days ago, I was decrying what I view as the worst cliché in the news game; describing silly news stories as sounding like they’re “from The Onion.” However, when I watch three deadly serious Fox News panelists discussing how blind people using seeing miniature horses is an example of government regulation gone wild, I really don’t know how else to describe it.

Basically, the story is that visually impaired people have begun turning to guide horses instead of seeing eye dogs for a number of reasons; they find them more physically stable, they’re allergic to dogs, the horses live longer, etc. However, since the horses are classified as “livestock,” the laws typically state that they need to be stabled outside. Fortunately for the owners, provisions in the Americans With Disabilities Act mean that businesses are required to allow them inside. Unfortunately for America, this is clearly the most evil thing ever. At least, it is according to Fox News and…no other news outlet.

Yet! Maybe Fox just scooped everyone!

Anchor Jon Scott was joined by Monica Crowley and Julie Roginsky did their best to explain the gravity of the situation. Crowley put it thusly:

“Everybody loves horses. Everybody wants the disabled to have what they need. But the Federal Government doesn’t have to be in the position of legislating and regulating every possible contingency in life.”

Good point, Crowley, but I don’t think many viewers were able to pay attention when there is literally footage of tiny horses wearing tiny sneakers being played while you talk. You could be talking about the eminent destruction of planet Earth and no one would care. Tiny sneakers!

Seriously, this segment filled with pundits talking dramatically while continuously being distracted by how “adorable” the b-roll footage is is one of the funniest things I’ve ever seen. It’s almost as if it’s a joke story from the…uh…from the…from some kind of humorous satire institution.